Since 2005, the research team at Sherpa Coaching has compiled an annual survey on executive coaching. This edition of the Expert Series offers brand new, unpublished information, exclusive to readers of choice Magazine.

We know that the value and credibility of coaching are consistently high. So, how do business leaders actually measure the complex benefits of coaching?

‘360 Feedback,’ a before-and-after method pioneered many years ago by Marshall Goldsmith, is used most: about 30% of the time. Other common methods include ‘Well-being and Engagement’ and ‘Performance Reviews,’ which are both used about 20% of the time. We found our newest measure, IOB (Impact on Business), being used 15% of the time in the 2017 Survey. Traditional ‘ROI formula’ and ‘Effectiveness of Learning’ both came in on the lower end of the scale, under 10% each.

Compared to last year, the two lowest-rated methods, ROI and Effectiveness of Learning, both fell further behind. Well-being and engagement lost about 10% of its support, dropping from 22% to 20%. Over the last few years, the number of executive coaches using ROI to measure the benefits of coaching has hovered at 10% or less. Performance reviews, it should be noted, surged upward from 16% to 20%, while Impact on Business also increased, from 13% to 15%. The 360 method stayed constant at 29%. 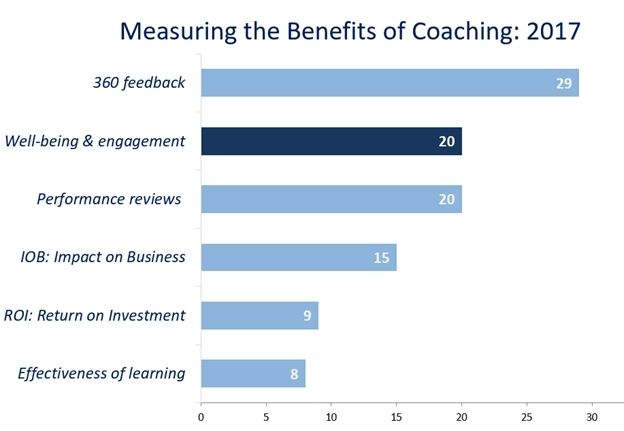 HR and other professionals are far more likely than coaches to use Impact on Business.

In a notable change, the number of consultants (business coaches) who use ROI to measure coaching’s value dropped from 33% to 25% three years ago, and now stands at 19%.

Globally, the 360 method is still the most frequent method of measuring benefits gained from coaching. However, Impact on Business did take 6% of the market share in the past year.

How does this information relate to your marketing and/or service to clients?

In our next exclusive report from the Executive Coaching survey, we look at the results to determine; How Coaches Market Their Services

The annual Executive Coaching Survey is published by Sherpa Coaching in Cincinnati, Ohio, USA. Managing Partner Karl Corbett leads the research team. Karl is also the university relations liaison for the Sherpa Coaching Certification at the University of Georgia, University of New Mexico and Howard University in Washington, DC. He can be reached at (513) 232.0002 or kc@sherpacoaching.com